Nemberala Beach Resort is a boutique surf resort on the island of Rote in southern Indonesia.

White sand beaches, swaying palm trees, and a 300-yard long left reef break are just a few of the beautiful things you’ll wake up to every day on a surf trip at Nemberala Beach Resort. This boutique surf resort has everything you’d want on a tropical island getaway, but what sets Nemberala apart is its remote location on the Indonesian island of Rote.

Rote is what you might call an off-the-beaten-path destination. It takes some doing to reach the island from Bali, but it’s that remoteness that has kept mass tourism at bay and makes this place so special.

It goes without saying that if you’re looking for a holiday with nightlife, shopping, and hordes of people, this is not the place for you. But if you’re into privacy, exploring pristine island beauty, and unplugging from the world for a bit, you’re in the right place. And then there’s the surf.

With access to half a dozen top-quality reef breaks and three boats to take you to the waves of your dreams, Nemberala Beach Resort delivers the goods.

Nemberala Left is the main break in front of the resort and the premier wave in the region. The break is also known as T-Land by some because of its similarities to G-Land, the famous wave on Java (although Nemberala is definitely a softer and more user-friendly wave).

Nemberala is a wave magnet so you’ll have access to great surf out front, and the resort’s boat captains are more than happy to take you to some of the lesser known breaks in the area.

Nemberala Beach Resort sits on a five-acre beachfront property and has four large duplex bungalows with traditional Rotinese alang roofs surrounding the pool. All packages include fan-cooled accommodations, four meals per day, tea/coffee/water, and surf transfers to all breaks within the local area (25 minutes by boat or vehicle).

With an amazing location on the sand, fantastic surf, and an abundance of unspoiled natural treasures to explore, Nemberala Beach Resort is an adventure worth the journey.

Nemberala Beach Resort sits on the southwest side of Rote facing Nemberala Left. Similar to the rest of Indonesia, Nemberala, Rote, and the surrounding areas pick up south and southwest swells tracking across Antarctica moving from below South Africa towards Southwest Australia. Swells can hit Nemberala all year round, but the typical surf season runs from March through November with the biggest swells hitting from May through September.

ESE Trade Winds blow from May through mid-September which is offshore for Nemberala left and a few of the main breaks around the island. The early and late season months of March/April and mid-September through October experience a more light and variable wind pattern, with wind possible from almost any direction you can also expect some glassy days. No matter what the wind and swell are doing, Nemberala Beach Resort has the knowledge and the fast boats to get you to the right spot given the conditions. 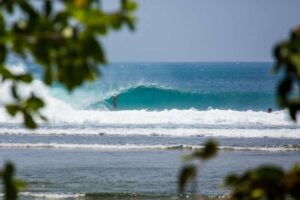 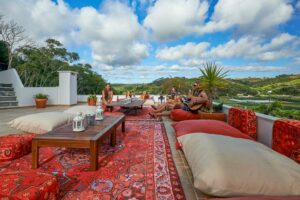 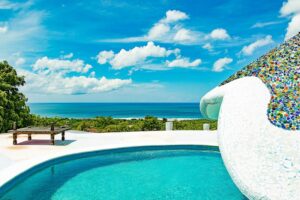