The Endless Summer is the classic surf film. Aside from the pure awesomeness of their surf adventure (pre-internet and pre-swell forecasts), the film brought surf to a broader audience and introduced the concept of surf travel. If you watch the film today, you’ll see that it’s as entertaining as ever, thanks to creator Bruce Brown’s cinematography and hilarious narration.

Here’s a collection of 53 of our favorite quotes from the legendary surf film masterpiece.

53 Epic Quotes from The Endless Summer

2. “Some surfers prefer the hairy thrill of a big wave.”

On How To Surf

5. “The only way to avoid a wipeout is to take this wide stink bug stance. Spread your legs and hang on ’til your trunks rip right off the back.”

6. “He stays in just perfect spot on the wave which is right in front of the white water and the breaking part of the wave, called the curl.”

7. The main object in surfing, is to always remain in the curl. Stay as close as possible to the white water without actually getting caught by it.

8. “This is a girl and for those of you who are maladjusted, here’s a Malibu outrigger.”

10. “Packing for the journey was important. Six pairs of trunks, two boxes of wax, some modern sounds, and in case of injury, one bandaid.”

11. “The rates here were unbelievable. $30 a day, each. When you walk through the door they stamp ‘sucker’ on your forehead.”

12. “It takes a while to get used to any new surfing spot, but here in Africa surfing for the first time, it takes a little longer. Mike on the left of the screen pointing out a rock just underwater. You find out where the rocks are. How the waves are breaking over the rocks or reef… find out if there’s any funny little fish who might be mad… things like that.”

14. “You weren’t bigger than the chief who is bigger than anybody, that’s why he was the chief. If you lost your board and the chief wanted to play with it there really wasn’t much you could say about it.”

15. “You can be so alone on the beach down there it’s almost scary.”

17. “What every surfer dreams of finding is a small wave with perfect shape. What we call a perfect wave. The odds against finding that are 10 million to one.”

18. The waves look like they had been made by some kind of machine. The rides were so long I couldn’t get most of them on one piece of film. On some of the rides I timed them in the curl for 45 seconds.

19. “You can’t tell how good a way that is until you actually ride it. on Mike’s first ride the first five seconds he knew he’d finally found that perfect wave.”

22.”They told us the waves there were funny looking things,  they said they looked like pipes. And they said the waves always look like that day after day… same stupid looking waves.”

23. Can you imagine riding a 15-foot wave shaped like this for 7 miles? You’d have a nervous breakdown the first 50 yards. I had one on a 3-foot wave.

24. “The only disadvantage was that you would get cramps in your legs from squatting down so long in the curl.”

25. “I couldn’t help but think of the hundreds of years that these waves must’ve been breaking here but until this day no one had ever ridden one. Think of the thousands of waves that went to waste… and the waves that are going to waste right now at Cape Saint Francis.”

27. “Lots of girls surf in Hawaii and many of them are very good.”

29. “On a crowded day in Haleiwa you see boards and bodies going in every imaginable direction.”

30. “Although by the calendar it’s wintertime, the water is 75° and so is the air. The temperature only changes about 2° during the year, so unless you have sensitive skin you can’t tell if it’s winter or summer in Hawaii. Hawaii is truly land of an endless summer.”

31. There was a young fellow out surfing that day who had a little trouble with a growth on his back. Actually, his father fixed him up with a life preserver so if he fell off, he’d float… face down. Dear ‘ol dad.

32. “Phil decided to cool off. Troll for sharks. Wiggle your toes three times and STRIKE!”

33.”Whether you like to surf, or sail, or surf a sailboat… Hawaii, even in the winter, is truly a land of an endless summer.”

34. “Everywhere they went they were greeted with a familiar cry surfers have heard 1,000 times each, quote: You guys reeeeally missed it, you should’ve been here yesterday.”

35. We call them sharks, the Australians call them ‘the men in the gray suits.’ Whatever you call them… they like your body.

36. “Bells Beach is the fly center of Australia. You going to the beach and there are 30 flies assigned to your body. When you leave they go back to command headquarters and wait for another assignment.”

39. “When the girls get wiped out they have some trouble losing parts of these suits. The darn things are so little they roll up in a ball and go down a clam hole or something and they never find them again. The lifeguards down there carry spare bathing suits. They carry 15 in a Band-Aid box.”

The Long Rides at Raglan

40. “You go out surfing for the day at Raglan- you get two rides: one after breakfast, and one after lunch. You try for three you starve to death.”

42. “In fact when Waimea Bay in Hawaii gets big, it’s a whole specialized part of surfing.”

45. “Just paddling out can be a national disaster.”

46. “Waimea Bay has only been ridden since 1958 when the first group of surfers challenged it. Surfers watched it break for 10 years before going out. Can you imagine the courage it took to be the first?”

47. “If you could harness the power of one of these waves you can light a city for a week.”

50. Good ol’ Hawaii and the dirty ol’ nasty Pipeline. This is a surfing spot that’s hardly even a surfing spot. It’s more like a Roman gladiators pit.

52. “There so much adrenaline pumping through your system on a wave like this that when you get to the shoulder for the easy part, you’re so relieved you just sometimes fall off in a semi-faint.”

For more Endless Summer, check out our interview with Bruce Brown on the 50th Anniversary of the film.

Or 5 Things We Learned From The Endless Summer. 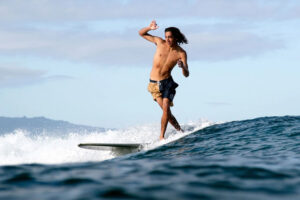 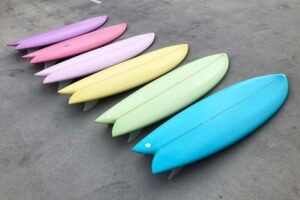 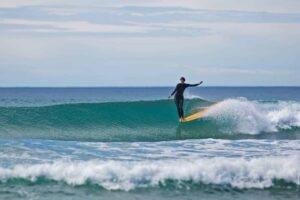