Banzai Pipeline is the center of the surfing universe, and has been for more than half a century. Each winter, tens of thousands of surfers flock to Oahu’s North Shore for a taste of Hawaiian juice and a shot at glory.

Whether they are chasing a Triple Crown, a world title, the wave of the winter or simply the wave of their life, each of those visitors have an opportunity to test themselves against the heaviest collection of waves on the planet—and none is heavier than Pipe.

These days, no ride goes undocumented at the hollow reef peak fronting Ehukai Beach. Hundreds of surfers crowd the compact lineup during good swells, and nearly as many photographers line the beach.

It isn’t uncommon for many of the world’s best barrel riders to log a two-hour session and come in with only one wave to their name. Meanwhile, guys like John John Florence, Jamie O’Brien, and other local talent at the top of the pecking order seem to have the spot dialed, and often walk away with a dozen noteworthy rides each session.

Epic Photos of Pipeline and Backdoor

Pipeline is located on Oahu’s North Shore, and enjoys consistent swells during the northern hemisphere winter (October through March). In general, west and northwest swells tend to work best for the left-breaking Pipeline, whereas more north/northwesterly swells are better for Backdoor (the righthander breaking off the same peak as Pipeline).

The classic days we see in videos and highlight reels from contests—when both Pipe and Backdoor are pumping—tend to happen on solid, long-period northwest swells. Both Pipe and Backdoor are good in east/northeasterly trades (the more east, the better). These are the predominant winds in Hawaii during the winter, so unless a swell hits during an anomalous wind pattern, Pipeline is usually clean.

Pipe and Backdoor break as a peak over a shallow stretch of reef with a semi-channel on the left and a much more fickle exit on the right. If you pick the perfect wave at Pipeline (and surf it perfectly), you will get spit out into the channel and enjoy a leisurely paddle back to the lineup.

But Backdoor is much more difficult to navigate, as many waves closeout, and even the perfect ones deposit you on the reef between Backdoor and Off the Wall, which is a great place to take a lot of heavy waves on the head.

First Reef Pipe is where most of the waves you have seen in pictures break. It breaks very near to the shore, on extremely shallow reef. Second Reef Pipe starts to break when the swell hits the triple-overhead+ mark, and typically features a less-intense roll-in entry before slingshotting the surfer into an unpredictable First Reef bowl.

Third Reef Pipe breaks when the swells hit the XXL range and the outer reefs start breaking. At this point, the lineup at Pipeline is typically out of control and unsurfable.

The shallow reef and heavy barrels aren’t the only hazards at Pipe. The lineup is typically very crowded when the conditions are good, and can be quite aggressive, particularly when the heaviest locals are in the water.

Those considering surfing Pipeline for the first time will want to be extremely confident in their barrel-riding abilities, and very comfortable in ultra-crowded lineups. If you aren’t the top tube-rider in your region’s marquee slab or barreling reef, then you probably want to avoid surfing Pipeline.

Check out our Guide to North Shore, Oahu >>

Check out the schedule of North Shore surf competitions>>

The History of Pipeline

The first time Pipe was ridden, it was a completely different scene. When Phil Edwards dragged his longboard down to Ehukai beach in December of 1961, the only person there to see him was filmmaker Bruce Brown.

Phil surfed a couple of four-footers that day, then swore the wave off, claiming it was too fast, too shallow, and too dangerous to surf any bigger. But the next day was overhead and perfect, and Phil couldn’t resist. With Brown filming from the sand once again, Phil paddled out and put together the first really proper session at the wave the two christened “The Pipeline.”

Rumors got out about Phil’s session, and Windansea heavy-hitter Butch Van Artsdalen saw a handful of photos. When he arrived in Hawaii for the 1962 season, Butch had Pipe in his crosshairs. The wave was considered to be the most dangerous on the planet, and the Shortboard Revolution was still a few years away, so anyone hoping to test themselves at Pipe would have to do it on a single-fin longboard.

But Butch was notorious as one of the hardest charging surfers of his time, both in the water and on land, so if anyone was going to take Pipe surfing to the next level, he was the guy.

As legend has it, the boys had been drinking heavily the night before (a popular pastime with visitors to the North Shore for the past 50 years, especially when the waves have gone flat), and a young John Peck was woken up mid-morning with news that Pipe was firing and Butch was already out.

Peck rushed down and joined Butch in the lineup, and in one session the two proceeded to redefine how heavy, hollow waves were surfed. Butch was on his forehand and met Pipe’s power with his own patented brand of aggression. Meanwhile, Peck was all finesse on his backhand and ended up developing a new drop-knee, backside approach that would eventually evolve into the modern pig dog. Check out this awesome montage of Butch (some footage is at Pipe, and some from other waves).

Brown’s footage of Phil Edwards’ first session was released in the 1963 film Surfing Hollow Days, and footage and images of Butch and Peck’s sessions soon followed. Pipe quickly became the talk of the surfing world, and 55 years later is still the barrel against which all others are measured.

Gerry Lopez was the next man to take Pipe by storm, and in the mid-’70s his performances there epitomized what it meant to exhibit grace under pressure while in the water. Dubbed “Mr. Pipeline,” Gerry would soul arch through the bowl at Pipe on his Lightning Bolt gun, which soon became one of the most popular selling models of its time, despite the fact that there were few other waves being surfed that actually required a board of that type.

Winners at Pipe tended to be standouts of their time, and have included Gerry Lopez, Rory Russell, Larry Blair, and Derek Ho (with two wins each), Tom Carroll (with three wins), Andy Irons (with four wins), and Kelly Slater (with an unprecedented seven wins).

In addition to the Pipe Masters, Pipeline also hosts two other important surf events each year—the Volcom Pipe Pro and the Da Hui Backdoor Shootout (Backdoor is the righthander that breaks off the same peak as Pipeline, and is considered by many to be the more challenging of the two waves, although Pipeline is more perfect).

More recently, local surfers such as Jamie O’Brien (JOB) and John John Florence (who both live within spitting distance of Pipe) have dominated the wave, winning multiple contests each and regularly scoring some of the best barrels at Pipe.

JOB has proven himself as an accomplished freesurfer and switchfoot barrel rider, while John John is two-time world champion and considered by many to be the best barrel rider in the world, if not the best surfer altogether.

Pipeline also hosts a bodysurfing contest, which has been won by nine-time bodyboarding world champ Mike Stewart a mind-boggling 13 times (Mark Cunningham is second with six wins). The contest doesn’t run every year, as there are often scheduling conflicts due to the small number of permits that are granted by the City and County of Honolulu Department of Parks for events at Pipeline each year.

But although the event hasn’t run the past few years, many agree that Mike Stewart is the most-barreled man alive, despite the fact that he rides the tube on his belly or on a bodyboard, rather than a surfboard.

Check out the schedule and lowdown on North Shore Surf Competitions >>

No matter how you approach Pipe, it is not a wave to be trifled with. Over the years it has taken the lives of many of surfing’s finest. Indeed, it is one of the deadliest waves in the world, having killed 11 people and severely injured hundreds if not thousands of others. But despite the risk, the world’s best surfers come back to Pipeline year after year, in search of what is now considered surfing’s ultimate ride.

To plan the perfect trip to Oahu, check out our in-depth Oahu Travel Guide>> 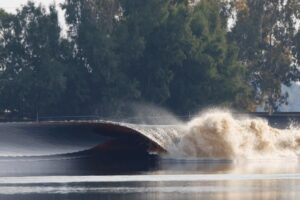 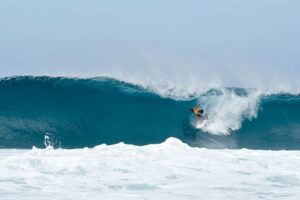